As universally liked as any single figure in the American film industry, Tom Hanks (birthname: Thomas Jeffrey Hanks) is synonymous with the All-American guy, portraying characters whose attributes outweigh their flaws—all of which this actor explores with a strong sense of humanism. In an American pop culture that can often be as divided as its politics, Hanks is the rare artist who is embraced by the widest possible public, and one of the few in his generation who spans the gap between “The Greatest Generation” of the World War II-Depression era and the Cold War/Space Race Boomer era—both of which he has memorably re-created on screen. Few actors in film history have received so many honors, including the Presidential Medal of Freedom and the arguably premature AFI Lifetime Achievement Award (at age 45!), just one measure of Hanks’ universal appeal.

A mere year after moving to New York City to pursue an acting career, Tom Hanks landed a co-starring role on an ABC prime-time sitcom—Bosom Buddies (1980-1982)—which led to a guest spot on another ABC sitcom, Happy Days. This was arguably the pivotal moment in Hanks’ career since it’s where he met actor-turned-director Ron Howard, who cast Hanks in the star-making role of Darryl Hannah in the hit comedy, Splash (1984). Thus, Tom Hanks jumped from TV to major movies in less than four years, and except for a few down-years at the box office in the late 1980s, has been a bankable star ever since. It’s a sustained record nearly unmatched in Hollywood history.

The experience of working with Jackie Gleason on Nothing in Common (1986) altered Hanks’ choice of roles, and even though he gained great acclaim and his first Oscar nomination (he later referred to it as affirmation that he was a real actor) with Penny Marshall’s comic fantasy, Big (1988), he gradually shifted away from more antic comedy roles toward full-rounded human characters with inner lives, whose own dramatic and comic shades could be brought out.

Despite a bump in the box office road with such failures as Brian De Palma’s bloated The Bonfire of the Vanities (1990), it was with such mega-hits as A League of Their Own (1992) with Geena Davis and Madonna, and Nora Ephron’s Sleepless in Seattle (1993) with Meg Ryan that Tom Hanks solidified his place as the supreme drama-comedy movie star of his era. This launched an extraordinary period in the 1990s, with his first Oscar-winning performance as a gay attorney with AIDS in Jonathan Demme’s Philadelphia (1993) with Denzel Washington, followed by his epic performance in Robert Zemeckis’ critical and commercial hit, Forrest Gump (1994), which has been over time both praised as a mythopoetic survey of America and lampooned as a saccharine fable as simple-minded as its hero.

Incredibly, 1995 was even more successful for Hanks, with two huge box-office hits: Ron Howard’s space thriller, Apollo 13, with Hanks as commanding astronaut Jim Lovell, and Disney/Pixar’s classic, Toy Story, arguably the most beloved single animated movie in the digitally animated era. (Only Disney’s Frozen gives Toy Story a run for its money in that race.) For a new generation of moviegoers, Tom Hanks became the voice of Sheriff Woody.

Tom Hanks began to expand his movie reaches into directing (the charming ‘60s music piece, That Thing You Do! (1996), and producing, with HBO’s From the Earth to the Moon (1998), the first of several ambitious miniseries capturing American history, including HBO’s superb limited series starring Paul Giamatti and Laura Linney, John Adams (2008). Indeed, no actor or filmmaker—except for perhaps his steady collaborator, Steven Spielberg—has been more associated with conveying American historical stories on the large and small screen than Hanks.

The late 1990s marked another pinnacle for Tom Hanks: He delivered a full-bodied, soulful performance in Steven Spielberg’s D-Day invasion drama, Saving Private Ryan (1998), which earned him another Oscar nomination; rejoined with Ephron and Ryan for another hit rom-com, You’ve Got Mail (1998); veered effectively into Stephen King territory with Frank Darabont’s fine adaptation, The Green Mile (1999); and revived Sheriff Woody in Toy Story 2, which is possibly even better than the original and scored huge numbers for Disney/Pixar.

Hanks’ bankability was so secure that he and Gump director Robert Zemeckis could audaciously deliver a movie featuring a nearly solo Hanks on screen for two hours for Cast Away (2000) and get away with it. Tom Hanks was also able to slide away from his good-guy image for a bad man in Sam Mendes’ period crime drama, The Road to Perdition (2002), and deliver the unconventional human comedy inherent in Spielberg’s caper-adventure, Catch Me if You Can (2002), all the while producing the unexpected hit comedy, My Big Fat Greek Wedding, making 2002 one of Hanks’ career-best years without an Oscar award or nomination to claim for it.

Besides Toy Story (including the 2010 Toy Story 3 and the 2019 Toy Story 4), the only other franchise Tom Hanks has ever attached himself to as an actor is the series of Dan Brown novels directed by Ron Howard, including The Da Vinci Code (2006) and Angels & Demons (2009), for which he received a record, $20 million-plus payday, based on the first movie’s worldwide gross of $758 million, as well as Inferno (2016).

It secured Hanks as Hollywood’s highest-paid actor, not including his earnings as a producer. (He has 58 producer credits to date, more than any other actor-producer of his time.) Those producer projects gathered steam through the 2000s, including the hit ABBA musical Mamma Mia (2008), Ken Burns’s epic documentary, The War (2007), HBO’s John Adams, and yet another work of history, The Pacific (2010). At the same time, Hanks finally worked with legendary director Mike Nichols on his final film, Charlie Wilson’s War (2007) with Julia Roberts and Philip Seymour Hoffman.

Although 2011-2012 marked a curious dip in the commercial and artistic strength of Tom Hanks’ movies—including the misbegotten flop, Cloud Atlas (2012) and his own directed film with Julia Roberts, Larry Crowne—Hanks rebounded with a stunning 2013, in Paul Greengrass’ stirring Captain Phillips—a role that seemed to be made perfectly for Hanks’ sensibilities–his rich portrayal of Walt Disney in the fine Saving Mr. Banks, about the creation of Mary Poppins, and his Tony-nominated Broadway premiere in Nora Ephron’s play, Lucky Guy.

Hanks continued to work with his regular filmmaking partner, Spielberg, on the spy thriller, Bridge of Spies (2015), and another veteran, Clint Eastwood, with whom he’d never previously worked, on the airplane thriller, Sully (2016). Hanks’ near-monopoly on playing real-life, all-American heroes continued in 2019 with an artistic career highlight, his magnificent portrayal of Fred Rogers in Marielle Heller’s imaginative and inventive A Beautiful Day in the Neighborhood.

He reunited with his Captain Phillips director, Paul Greengrass, for the gritty literary Western, News of the World (2020), and turned to pop music history for Baz Luhrmann’s Elvis (2022), in which he played Presley’s manager Tom Parker. In later 2022, Hanks appears as Gepetto in Robert Zemeckis’ live-action version of Pinocchio for Disney and will appear in the large ensemble for Wes Anderson’s Asteroid City (2022). His latest project is as the lead in Marc Forster’s adaptation of Frederik Backman’s best-seller, A Man Called Otto (2022). 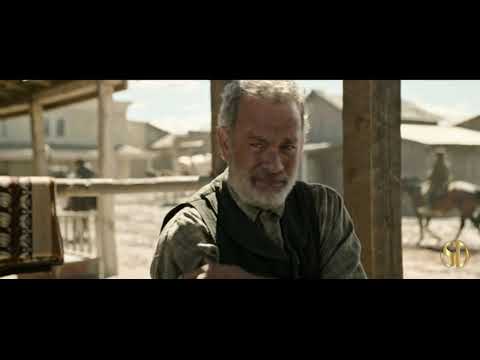 Born in the Bay Area suburb of Concord, Tom Hanks was raised by parents in a rocky marriage: Janet Marylyn Hanks and Amos Hanks, who divorced when Tom was 4. Tom was raised by his father, along with his siblings, writer Sandra Hanks Benoiton and entomologist Lawrence Hanks, while his younger sibling, actor Jim Hanks, was raised by his mother. Though self-described as “painfully, terribly shy,” Hanks got involved in high school theater in Oakland, and after graduating attended Chabot College and then Cal State Sacramento, where he studied theater.

He dropped out to work full-time at Cleveland’s Great Lakes Theater Festival. Tom Hanks was married to Samantha Lewes from 1978 to 1987. After his divorce from Lewes (with whom he had two children), Hanks married actor Rita Wilson in 1988 (two children). Hanks’ children are Truman Hanks, and actors Colin Hanks, Elizabeth Hanks, and Chet Hanks. Hanks’ estimated net worth is $400 million.* His height is 6’.

News of the World

A Beautiful Day in the Neighborhood

Catch Me if You Can

Some Facts About Tom Hanks

Succeed by Failing: Tom Hanks was ranked in People magazine’s 2010 ranks of the “Top 10 College Dropouts.”

Never Too Young: Hanks received the American Film Institute’s Lifetime Achievement Award at age 45, the youngest to ever do so.

Awards Mantle: Tom Hanks is easily one of the most awarded figures in contemporary American film, including the rare recipient of career honors from The Kennedy Center, Film at Lincoln Center (formerly Film Society of Lincoln Center), Museum of Modern Art, and the American Film Institute, as well as the highest civilian honor from the U.S. Navy, the Distinguished Public Service Award.

Oscar Champ: After Spencer Tracy, Hanks is only the second actor to ever win consecutive Best Actor Oscars, for Philadelphia and Forrest Gump. (Hanks and Tracy were both ages 38 and 39 when they won.) In the 1994-2004 Oscar decade, he is tied with Meryl Streep, Sean Penn, Ed Harris, and Judi Dench for most-nominated actor and is the most winning actor.

Collector: Tom Hanks is a dedicated collector of typewriters, numbering over 100 to date.

Mr. Box Office: Hanks ranks as the third highest-grossing actor of all time, with domestic receipts alone of nearly $5 billion.

Dual Citizenship: Tom Hanks is a dual citizen of the U.S. and Greece.

Baz Luhrmann Praises Tom Hanks as “One of the Great Actors of All Time” and A...