Emerging as one of Hollywood’s most likable new stars, Chris Pratt (birthname: Christopher Michael Pratt) has become a fan favorite in especially the running franchises, MCU’s Guardians of the Galaxy and Jurassic World. Discovered by actor-director Rae Dawn Chong while he was serving at Bubba Gump restaurant, Chris Pratt was cast in Chong’s short film, Cursed Pt. 3 (2000). Most of his early work was in television, with occasional small parts in movies like Matthew Allen’s Walk the Talk (2007), with Cary Elwes and Ileana Douglas, but his major career turn was being cast, as Andy, in the ensemble of the hit NBC sitcom, Parks and Recreation (2009-2015).

Chris Pratt entered the realm of blockbusters in 2014, voicing the role of Emmet Brickowski in Phil Lord’s and Christopher Miller’s The Lego Movie, and as Peter Quill/Star-Lord, the affable pilot in Marvel’s mega-hit action comedy, Guardians of the Galaxy, both earning a combined $1.24 billion worldwide box office. Pratt’s next blockbuster topped even that outstanding gross, as he replaced Josh Brolin as Owen in the Jurassic Park reboot, Jurassic World (2015), with Bryce Dallas Howard and Vincent D’Onofrio.

This meant that Pratt had lead or co-lead roles in three of the most successful franchises at the same time—Guardians of the Galaxy, and the associated Marvel Comics Universe; The Lego Movie; and Jurassic World. These three ongoing tentpoles provided Pratt with the lion’s share of his roles from 2014 to 2022, with notable departures, such as Antoine Fuqua’s The Magnificent Seven (2016), the Morten Tyldum-directed science fiction drama, Passengers (2016), with Jennifer Lawrence, Michael Sheen, and Laurence Fishburne, and star of Amazon’s The Tomorrow War (2021), with Yvonne Strahovski and J.K. Simmons.

Chris Pratt’s busy MCU presence as Peter Quill and Star-Lord includes not only Guardians of the Galaxy Vol. 2 (2017) and Guardians of the Galaxy Vol. 3 (2023), but the mega-grossing Avengers: Infinity War (2018), Avengers: Endgame (2019) and Thor: Love and Thunder (2022). His busy 2019 was the same year he returned as Emmet (as well as new character Rex Dangervest) in The Lego Movie 2: The Second Part.

Pratt resumed his character of Owen in Jurassic World: Fallen Kingdom (2018), again with Bryce Dallas Howard, followed by Jurassic World Dominion (2022), with Howard and Jurassic Park alum Laura Dern, Sam Neill, and Jeff Goldblum. Expanding his franchise portfolio to include the Super Mario Brothers, Pratt is starring as the voice of Mario in the untitled Super Mario Brothers movie set to be released in 2023, with co-stars Anya Taylor-Joy, Jack Black, Keegan-Michael Key, and Seth Rogen. Pratt is also voicing the crafty cat Garfield in Garfield (2023), with Samuel L. Jackson. 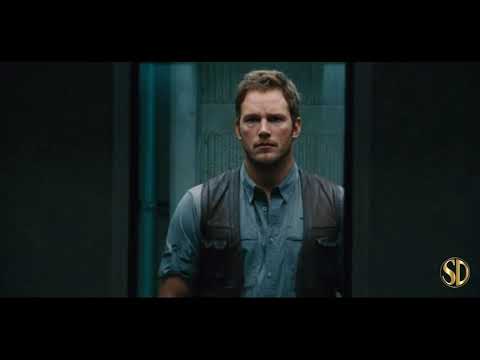 Born in the Minnesota town of Virginia, Chris Pratt was raised by Daniel and Kathy Pratt. He has two siblings, Cully and Angie. His family moved to Lake Stevens, Washington when he was seven years old, and graduated from Lake Stevens High School. He attended the local community college, then dropped out. Pratt was married to actor Anna Faris from 2009 to 2018; the couple had one son, Jack. He is currently married to author Katherine Schwarzenegger; the couple has two daughters, Lyla and Eloise. Pratt has three children. He is 6’ 2”.

Guardians of the Galaxy

Guardians of the Galaxy Vol. 2

Guardians of the Galaxy: 2020 Re-release

The Lego Movie 2: The Second Part

Some Facts About Chris Pratt

The Russo Brothers Assemble: Inside AGBO, Their $1 Billion Studio and When Th...